Grants and subsidies for solar panels in Madrid

The Autonomous Community manages €87 million, which come from the Next Generation funds, with tax rebates also being added to these resources.

In Madrid, installing solar panels on a home costs around €6,000 on average. The price can be reduced by almost half with the incentives offered by the Regional Government. Once the installation is completed, each single-family property can obtain savings of up to 70% in its electricity consumption, which for a family with an average consumption, means around €550 per year on its electricity bill, according to information from the Autonomous Community.

Thus, with the existing subsidies (mostly from Next Generation funds), citizens can reduce the payback period of their solar panels by two to three years.

Grants for Next Generation Funds

The Community of Madrid manages more than €87 million in grants, which are divided into three categories: self-consumption, storage (batteries) and renewable heating/air conditioning. They also cover a variety of technologies: photovoltaic, wind, biomass, geothermal, hydrothermal or aerothermal energy for heating/air conditioning and domestic hot water in homes.

The total of these resources comes from the Next Generation Funds. The grants are divided into six programmes, each targeting a specific sector or service. The fourth and fifth programme concern photovoltaics in the residential sector.

The amount of grants will vary according to the beneficiary and the type of installation. In the case of the implementation of photovoltaic self-consumption, incentives range from €300 to €600 per kilowatt peak (kWp) for the residential sector. And from €500 to €1,000/kWp, for public administrations and the third sector. The incorporation of storage systems is subsidised with contributions of between €140 and €490/kWp.

Owners' association. Block of flats with individual consumption with photovoltaic and storage.

The allocation for the installation of solar panels in the residential sector (programme 4 and 5) has been 100% allocated, but applications for these lines of grants are still being submitted and will be considered if new funds are forthcoming.

municipalities with less than 20,000 inhabitants

In addition, the Next Generation funds, linked to self-consumption and energy storage, provide additional support for actions carried out in municipalities with less than 20,000 inhabitants on non-urban land and 5,000 on urban land.

The additional grants can range from €30 to €55/kWp for the installation, and €15 kWh (kilowatt hour) for the battery (storage). 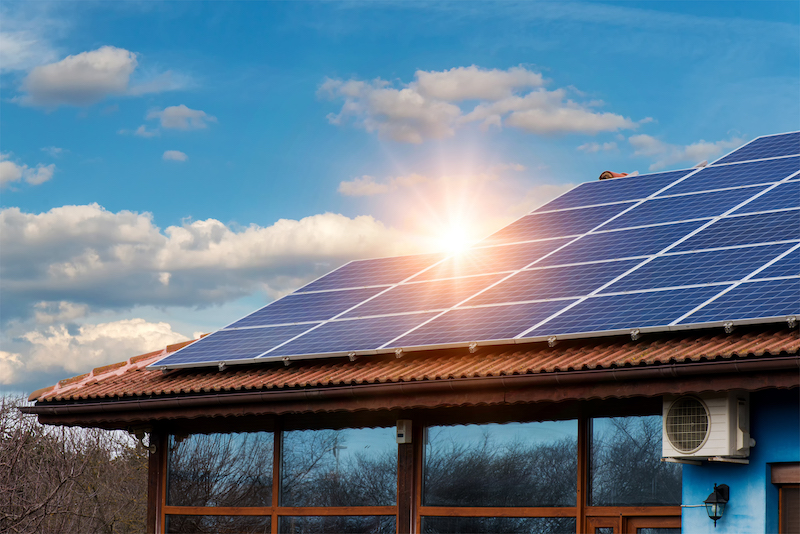 The installation of solar panels, in the different Town Councils of the Community of Madrid, has a rebate on the Real Estate Tax (IBI). The tax is municipal in nature and the percentage and duration of the rebate varies according to the municipality.

In Madrid, for example, the reduction is up to 50% during the three years following the completion of the installation of the panels. In Getafe the percentage is lower (30%), but it lasts for 10 years. In Alcalá de Henares, on the other hand, the percentage is 50% and lasts only one year.

Tax on Construction, Installations and Works

This indirect tax is levied on any construction, installation or work that requires the corresponding building or urban planning licence to be obtained. The tax rate is set by each Town Council and may not exceed 4% of the cost of the material execution of the work. 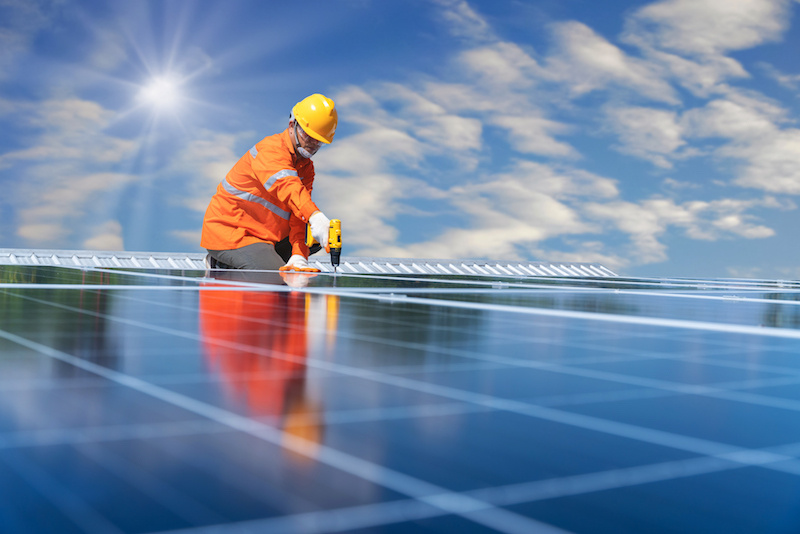 For those properties with photovoltaic panel installations there is a rebate, which varies in percentage depending on the Town Council. In Madrid, for example, it is 95%, while in Leganés it is 5% and in Fuenlabrada it is 50%.

The national Government has launched three new temporary deductions in the total amount of personal income tax (IRPF) for those who have carried out energy improvement works, including the installation of solar panels.

The reductions range from 20% to 60% depending on the improvements of the property.

The solar energy of all, for all

Install your own solar panels

Find your home on the map and draw on your roof. In this way we will know the surface area you have available and you will be able to obtain a personalised proposal for your home.

A personalised plan for customers who care about the environment and use solar energy at home, a rate focused on the night-time hours.

Advantages of having Smart Solar

Savings on your bill

You will use your own clean energy and with the Solar Plan, you will further reduce your electricity bill.

Take care of the environment

You will be generating and using CO2 emission-free energy that is 100% renewable.

Save by sending your unused power to the grid, too. Iberdrola will compensate you for your surplus at the best price.

With our app you can control how much energy you produce and consume in real time, from anywhere and at any time.

A financing option that fits your needs. Help with applying for subsidies

You will have a comprehensive solution with everything you need, from a preliminary study to maintenance.

Here are the questions our customers ask most frequently.

Photovoltaic self-consumption is the process of generating electricity using the sun's energy in the same place as it is consumed, thereby reducing the flow of electricity coming from the grid and improving efficiency.

Yes. Generating energy using your own photovoltaic installation and then consuming it yourself is not only legal, but by doing so you will help make our planet a better place, while helping achieve the UN's Sustainable Development Goals.

No. The charges for the consumption of the energy you generate yourself have been abolished, meaning no additional costs and savings on your next bill.

Yes. These may be available from various sources:

Smart Solar Iberdrola will be delighted to provide information about all the possibilities where you live.

To know which size best suits your needs you must analyse your energy consumption to find out what proportion occurs during daylight hours. For this you need your hourly consumption curve (provided by your supply meter), which you can then check against the sunlight on your roof.

You can do this via the "Discover Your Offer" section of the Iberdrola website (here). We could also do it for you if you wish.

Sunlight shines on the silicon cells that make up the photovoltaic panels to generate electricity in the form of direct current. This is then passed through the inverter, which converts it into alternating current that, once it has passed through your home's mains panel, can be used for domestic consumption.

When your installation is generating, you will consume less energy from the grid. It may even produce a surplus, that can then be fed into the grid. You do not need to install an additional energy meter.

The new self-consumption installation will reduce your grid energy demand and, if it does not include batteries, reduce your bill by around 30%.

If you install batteries, you could reduce your current electricity bill by up to 70%.

In order to best evaluate your saving, you will need to provide detailed data regarding your present consumption and to know your actual energy price.

Go to the Iberdrola website and use the simulator (here) to obtain a detailed and customised report on the economic benefits of a self-consumption installation.

The installation works are simple, they do not generate debris and will not last longer than 1-2 days. The panels will be installed on the roof of your home and be connected to the inverter and to your mains panel using standard electrical cabling.

The installation works will require a construction permit. This will take between 2 weeks and 3 months to be granted depending on municipal district in which you live.

The photovoltaic panels last for an average of 30 years, meaning that if the installation is well maintained it will provide you with many benefits over the coming years, for which the planet will be truly grateful.

Current regulations state that renewable self-consumption installations with an installed power of under 100 kW can benefit from the simplified surplus compensation scheme.

Simplified surplus offsetting involves the value of the energy you feed into the grid being calculated by your electricity supplier and the resulting value being discounted from the energy section of your bill.

Iberdrola Clientes offers surplus offsetting in its various rates to those users who wish to benefit from this model.

The maximum amount offset will be the cost of energy billed monthly. The power term must continue to be paid on a monthly basis.

Once the photovoltaic installation has been completed, and during the process to legalise it with your regional government, we will indicate that you wish to benefit from the simplified surplus offsetting model. Your regional government will have a few days within which to notify the electricity distribution company in our area which, in turn, must notify your electricity supplier, again within a few days. The law that regulates surplus offsetting has only recently been passed, meaning that there is still a chance this process may take somewhat longer than planned, depending on where you live.

If you contract the installation with Smart Solar Iberdrola you will not have not have to worry about anything. We will take care of everything, including the formalities.

The offsetting price will be fixed between your direct supplier and the customer. In the event the customer is subject to the Voluntary Price for Small Consumers (PVPC), the market value published on the Red Eléctrica de España website will be used.

Iberdrola Clientes offers you a variety of plans for benefitting from the simplified offsetting model. In particular, and with photovoltaic self-consumers in mind, Iberdrola Clientes has created the Plan Solar, which enables you to offset your surpluses at the best price, in addition to optimising your rate bearing in mind when the sun rises and sets depending on the time of year.

In order for the electricity retailer to be able to issue a bill, the distribution company (responsible for meter reading) will apportion the energy produced on an hourly basis among the associated customers according to their percentage shares. The hourly energy use to be billed to a consumer is the difference between the meter reading at that time less the corresponding part of the energy generated by the shared installation.

Simplified surplus offsetting involves the value of the energy you feed into the grid being calculated by your electricity supplier and the resulting value being discounted from the energy section of your bill.

Shared installations can also benefit from simplified surplus offsetting. These surpluses will not go to your neighbour, and you will use your share of the energy produced even though you might not be at home when it is produced.

The maximum amount offset will be the cost of energy billed monthly.

The participants come to an agreement regarding how they apportion the energy generated to cover shared requirements and private homes. Installation and maintenance costs are divided up accordingly in the same proportion.

A signed energy apportionment agreement, signed by all the participants, is required to legalise the installation. But don't worry. We will take care of all the formalities.

Yes. These are available from a number of sources and they differ from municipality to municipality:

Smart Solar Iberdrola will be delighted to provide information about all the possibilities where you live.

We will resolve them for you via any of our channels.

You can contact us through either of these two channels